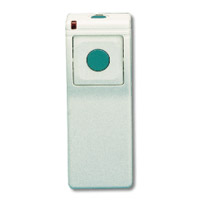 The Model DXT-21 2-Button, 1-Channel Handheld Transmitter is a battery powered portable transmitter designed for use with Linear’s DX Format receivers. Each transmitter can be used in a limitless number of wireless remote control applications. Pressing a button on the transmitter sends a digitally coded wireless signal to its companion receiver.